Putting Fiji On The Plate

There’s a disconnect between Fiji’s tourist resorts and local farmers, with much of the food eaten by tourists imported – even some of the tropical fruits.

Indeed, when the Tourism Minister Fayez Koya dines out with the Agriculture Minister, they go through every item on the plate and ponder whether it is local. By their reckoning, the local content is rising.

“There are the people that can supply the tourism sector,” Koya says. “We don’t really have to import so much. We do import a lot of things that we can actually grow.”

“So, yes, there’s a huge effort from us to try and encourage more people to farm, to be able to supply the hotels.”

Even the Governor of the Reserve Bank of Fiji, Barry Whiteside, has weighed in.

“Industry feedback reveals that some hotel procurement staff set unrealistic standards on the shape and size of certain local fruit and vegetables, without duly recognising that our agricultural produce is amongst the sweetest, tastiest and freshest the world over,” he says.

A researcher at the University of the South Pacific, Greg Cornwall, runs training programs for the Fijian hospitality industry with his business partner, Colin Chung, a Hawaiian-Chinese chef who lives in New Zealand and has been visiting Fiji for 40 years.

Cornwall says that tourist surveys rank Fijian visits highly on friendliness, room cleanliness and other measures, but that food often gets the lowest scores.

“Farmers benefit because we are introducing chefs to new items being grown that they have never used before such as jicama, heart of palm, bora beans, dried bananas, etc. Modern travellers want to eat local as long as it tastes and looks good, and it will make meals cheaper for tourists as some think Fiji is expensive.”

“When we started out, the guys would be shy about their food, they don’t think Europeans would like to eat it.”

This training can involve a ban on ‘French fries’ in favour of ‘Island fries’, using root vegetables such as dalo (taro), cassava and kumala (sweet potato or kumera in New Zealand), and even a variety of dense banana, the vudi. If mashed potatoes are unavoidable, it at least can be half spuds and half kumala. 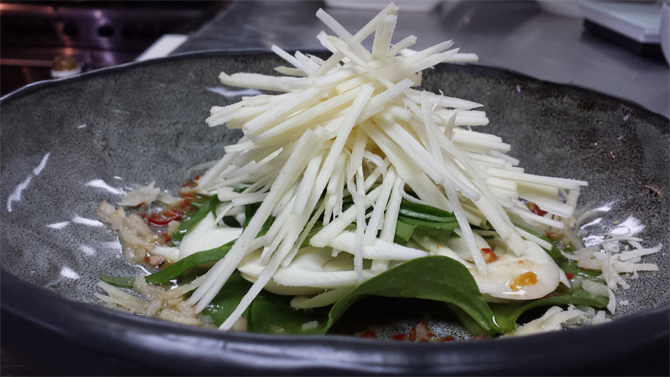 Instead of imported steak cuts, tourists can be tempted with local pork dishes such as spare ribs. A local legume now found in Indian dishes, the bora bean, can be used in bean salad; baked scones can use bananas instead of sultanas; and Asian-style coleslaw with hoisin sauce can get a South Pacific twist coconut or banana using virgin coconut oil.

Cornwall says that local chefs are using more local produce in their menus and there are some great Fijian ‘foodie’ practitioners supporting the Ministry of Agriculture’s ‘Eat Fiji Grown’ initiative, such as Janey Lilo and Shailesh Naidu.

Colin Chung has a forthcoming cook book of contemporary Fijian cuisine, Kana Vinaka, which will be launched in March. 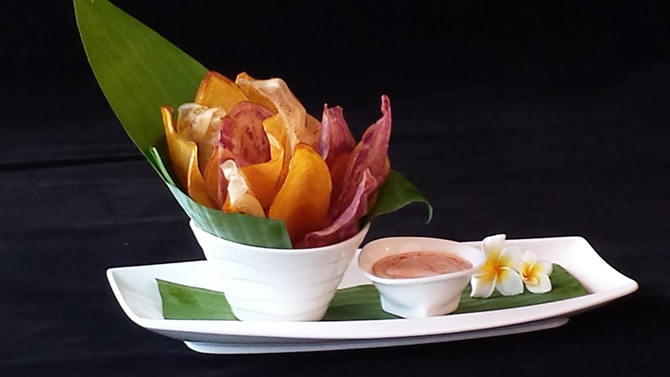 But there can be practical problems, such as resort purchasing officers expecting a gift from suppliers such as, say, a bottle of whisky.

Cornwall says that expatriate chefs are so busy, and working such long hours, that it is easier to get one shipment from Australia with everything they need, rather than dealing with multiple local farmers who can’t afford to give credit and want to be paid in cash straight away.

However, one model that shows promise is the participant guarantee system (PGS), which is a quality assurance system by local producers. Smallholder farmers organise their harvest to sell as a group to specified markets like local resorts or supermarkets.

The program, run by the University of the Sunshine Coast with Dr Rob Erskine-Smith as agribusiness consultant, began with high-value tomatoes and has expanded to new products like broccoli and the kava shrub. It employs a Fijian community coordinator with expertise in business skills, grading crops and conducting transactions.

So the future for local produce is looking up. In the meantime, visitors should try the national dish of kokoda (which is pronounced coco-ndah) can make the taste buds tingle – raw fish marinated in lemon or lime juice, with coconut milk (lolo) and trimmings.

Cornwall believes that food exports will increase as tourists create a demand for exotic otta (a jungle fern), nama (a seaweed known as sea grapes), dried bananas, bottled fruit relishes and beverages, and that new tourists will be attracted to Fiji to experience the Pacific’s new cuisine.

Mark Skulley is one of Australia’s most-respected business journalists, a veteran of more than two decades at Fairfax Media including The Australian Financial Review. This piece is the second in a three-part series on Fiji. You can read the first piece HERE.